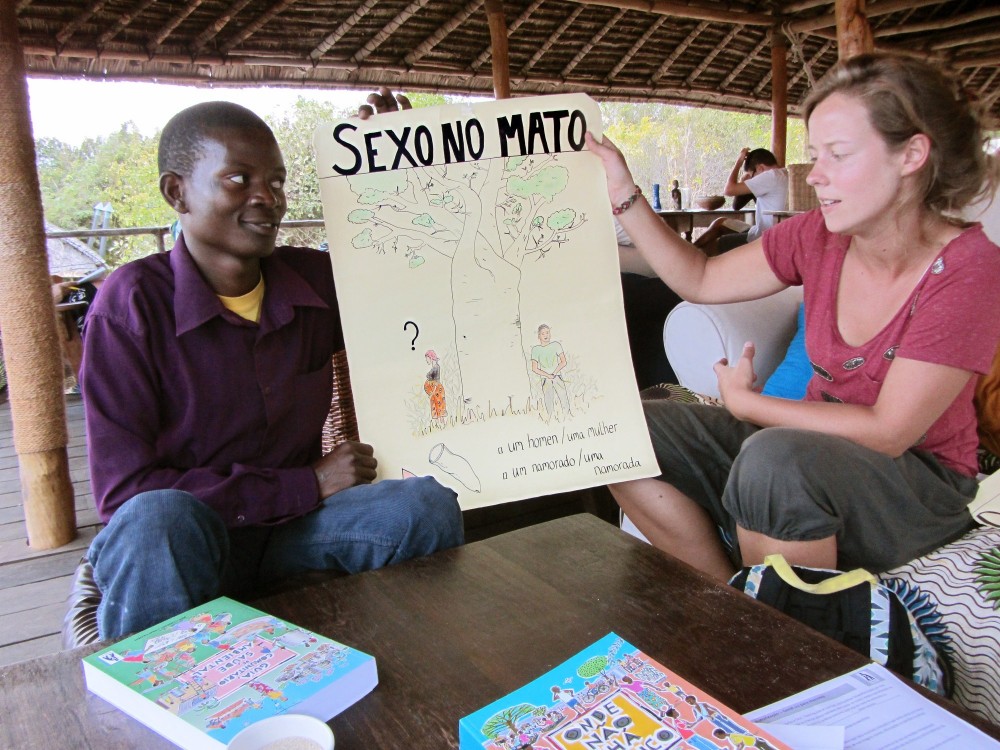 Feliciano Julio is a community worker in a small village in Nampula province in Mozambique. He has a number of different roles which include acting as interpreter, supporting health activists and volunteers, and building latrines. He has been using the books ‘Onde Não Há Médico’ (‘Where There Is No Doctor’) and ‘Guia Comunitário de Saúde Ambiental’ (Community Guide to Environmental Health’) for many years as he explains the issues to the health activists and volunteers, showing them the diagrams and making posters for use in teaching and village discussions.

The village does have a mobile phone signal but electricity is intermittent and not everyone has a mobile phone – he says having the book to refer to and share is invaluable. When I visited him, he was working with a Dutch medical student, Joline Bakker, on a short video on ‘Sex in the Bush’ to address the major health implications for young people who are unaware of the risks of infection or pregnancy. Feliciano said that young people were experiencing sex at ever younger ages – even as young as 8 years old. Joline explained she read the English version of the book and then made sure she had the right Portuguese terminology from the Portuguese version before talking to the villagers. They had really enjoyed making the video and this seemed a great way of getting people to participate and learn at the same time.

Feliciano said one of the most useful parts of ‘Onde Não Há Médico’ was the formulary, marked by green pages. These pages were very easy to follow and allowed him to check medications that people had been prescribed or bought for themselves, explain how the medicines work and possible side effects.

When asked which chapters were the most useful Feliciano said that he mostly used those on nutrition, hygiene, malaria, family planning and sexually transmitted diseases including HIV.
He said the chapters on building latrines in ‘Guia Comunitário de Saúde Ambiental’ were especially important in order to break the vicious cycle of diarrhoea. Any further editions, he hoped, would include a section on sex education for the young. Since returning from Mozambique, I have learnt that concern about possible sexual exploitation in young girls is a fear not just in Mozambique but in neighbouring countries too. It is imperative that we get more information into the hands of healthworkers working with communities on improving health and health education.