For orders to be delivered before Christmas please see our delivery information page . Please contact us if you have any questions. 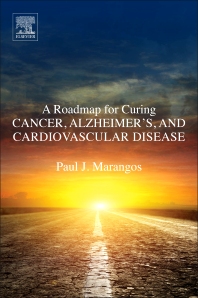 A Roadmap For Curing Cancer, Alzheimer, And Cardiovascular Disease

Cancer, dementia, and cardiovascular disease are responsible for almost two million deaths each year in the United States alone and represent the largest immediate threat to humanity. Over the last century, we have made spectacular advances that have transformed our society – splitting the atom, space travel, telecommunications, and the Internet – but with medical research focused mostly on science for the sake of science, it has yielded precious few cures.

A Roadmap for Curing Cancer, Alzheimer’s, and Cardiovascular Disease represents a “first of its kind” effort to address both the reasons for this and to posit solutions to fix our broken system, in an effort to finally end this cure crisis. Dr. Marangos draws on 45 years of experience in every aspect of the biomedical R&D field, from basic drug discovery research at the NIH to the co-founding of five drug companies. He has published 252 research papers and edited four books on drug discovery, is co-inventor on 14 patents, and founded “The Journal of Molecular Neuroscience”. He argues that from a development perspective, the regulatory, patent, and legal hurdles that force industry to pursue so-called “me-too” drugs rather than cures for terminal diseases must be re-thought. Leadership accountability, strategy, focus, and urgency need to be re-evaluated, and major reforms to the NIH, FDA, and patent codes are proposed.to remedy these impediments to cures. Written for anyone frustrated with the seemingly endless threat of terminal disease, this book seeks to inform, energize, and provide the rationale for the public and industry stakeholders, as well as clinicians and researchers, to resurrect the physician-patient relationship and demand that we get serious about ridding society of this scourge on humanity.

Key Features
First comprehensive analysis of the failures in curing cancer, Alzheimer’s, and cardiovascular disease with solutions proposed
Defines deficiencies in academic life science research, including conflicting incentives, QA/QC issues, and how to fix them
Provides a rationale for FDA reform especially as it relates to terminal disease drugs
Details how a reformed NIH, regulators, and industry can partner to form a NASA-type effort to speed cures of terminal diseases
Provides the first detailed roadmap for life science researchers to conquer terminal disease
Readership
Anyone concerned about curing terminal disease. The general public and Alzheimer’s researchers, cancer, and cardiovascular researchers. Healthcare stakeholders such as insurance companies, payers, drug industry, universities, institutes, charities, and the legal community, federal and state government policy makers. Anyone who has experienced either directly or indirectly the agony of terminal disease.

© 2021 Health Books International
Managed by Practical Action Publishing Limited, Company Reg. No. 1159018, England, VAT No. GB 880 9924 76 is the wholly owned by Practical Action, Reg. Charity No. 247257, Patron HRH The Prince of Wales, and trades only in support of its parent charity objectives.
1